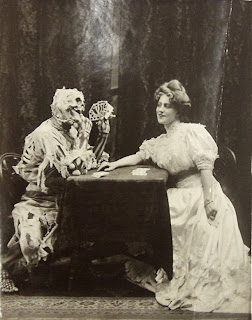 Email ThisBlogThis!Share to TwitterShare to FacebookShare to Pinterest
Labels: Poem

Posted by ಬಾನಾಡಿ at 4:35 PM No comments: 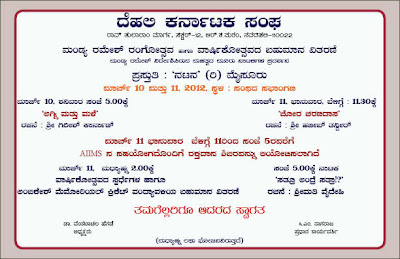 Posted by ಬಾನಾಡಿ at 1:52 PM No comments: 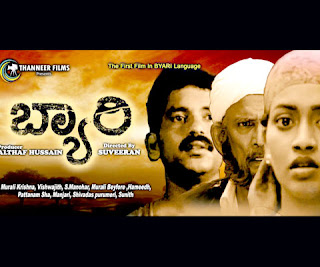 Elated at his debut film getting national award for best film, the director of Byari KP Suveeran said the film was about conditioning of women in the Byari Muslim community based on sexuality.
Byari shared the national award for best film with Marathi film Deool by Umesh Kulkarni at the 59th National awards announced today.
"Byari (also known as Beary), is an ethnic society trapped in their own faiths and beliefs, having its own traditions and distinct cultural identity. I did a lot of research on the society and their beliefs after reading works by various authors," he said.
He said the film was shot in 16 mm on a limited budget, but he could capture the environs of the Byari despite limitations. "When I see the film now, I think I could have beautified it more," Suveeran, hailing from Kannur, said.
"I am basically a theatre man. And you can find some traits of the theatre in the movie also. When I started working on this film, I had to face this challenge. A certain amount of give and take should be visible when one works in both the mediums," he said. 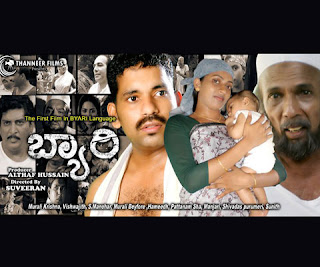 This is the first-ever film made in Byari language, spoken mainly by people belonging to the community concentrated in the coastal regions of north Kerala and Dakshina Kannada district in Karnataka.
In the Ullal region in Dakshina Kannada, people belonging to other communities have also adopted Byari as their local language. Byari language, which has links with Malayalam, Urdu and Tulu, does not have a script.
The film, which was shown in some festivals, had won rave reviews. It has Tamil and Malayalam actress Mallika (who got a special mention from the Jury for her performance) in the lead role, while popular Malayalam actor Mamukkoya--appears in a "very serious negative role" in the film as her father, the director said.
Posted by ಬಾನಾಡಿ at 5:17 PM No comments:

No country is as colourful in its traditions as India - from the lavish sets of Bollywood and the rich spectrums of their cuisine to the lush pigmentation of silk saris and religious icons.
So to celebrate the spring - the time of year when dark, bleak winter fades and flowers bloom into a thousand shimmering shades - they really have to pull out all the stops.
Thousands of Hindus came from across India to the small village of Nandgaon, near Mathura in Uttar Pradesh, to celebrate the Lathmar Holi Festival Friday. 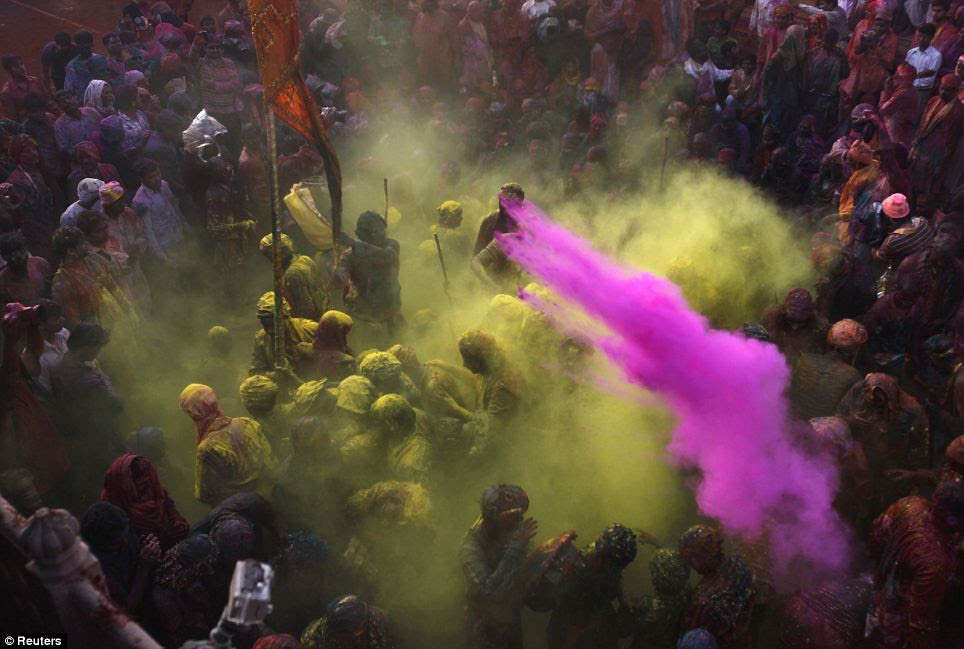 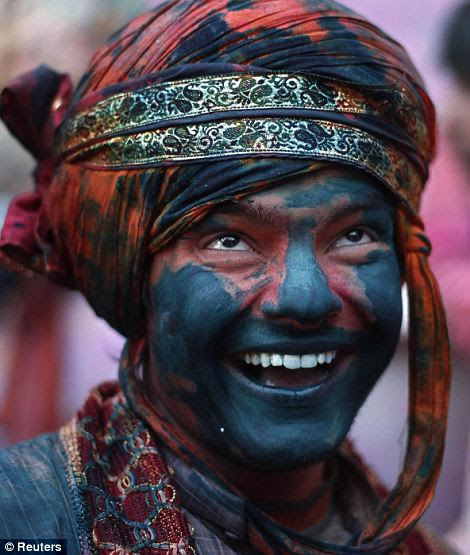 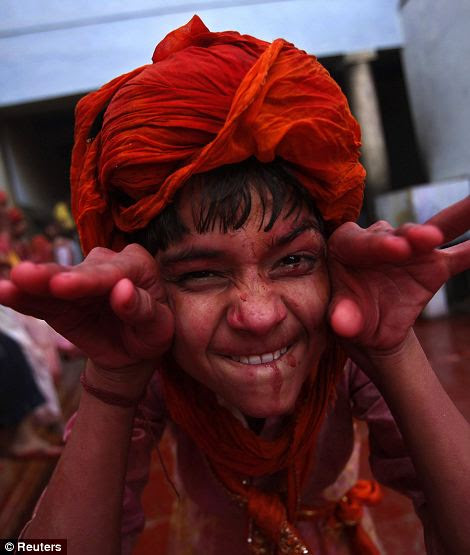 Ecstatic: Participants quaff cold drinks laced with bhang - a paste made from cannabis - as the run around the town playing and making merry
A prelude to the major national Holi spring festival - known as the Festival of Colours - it sees participants shower each other with brightly coloured dyes and millions of flower petals.
According to legend, Lord Krishna visited his principle consort and childhood friend, Radha, in the village on this day and playfully teased her and her friends. The women responded by chasing him away with sticks.
In the festival men in traditional dress take on the role of gops (friends of Krishna), while women play gopis (friends of Radha).
The men sing provocative songs and throw the coloured powders and flowers on the women, who fight back by pretending to beat them with bamboo. 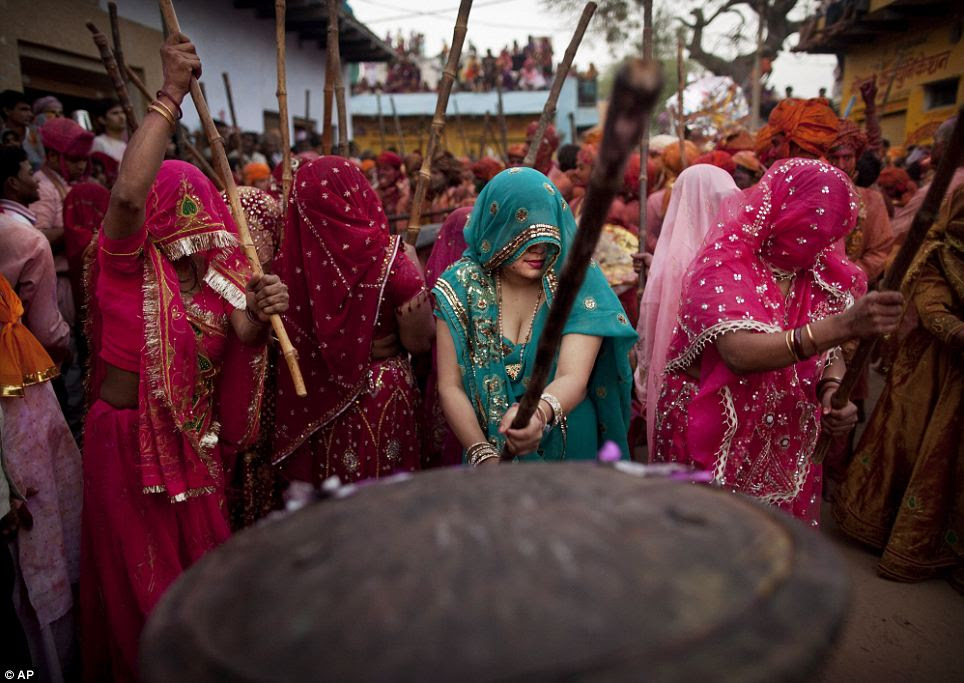 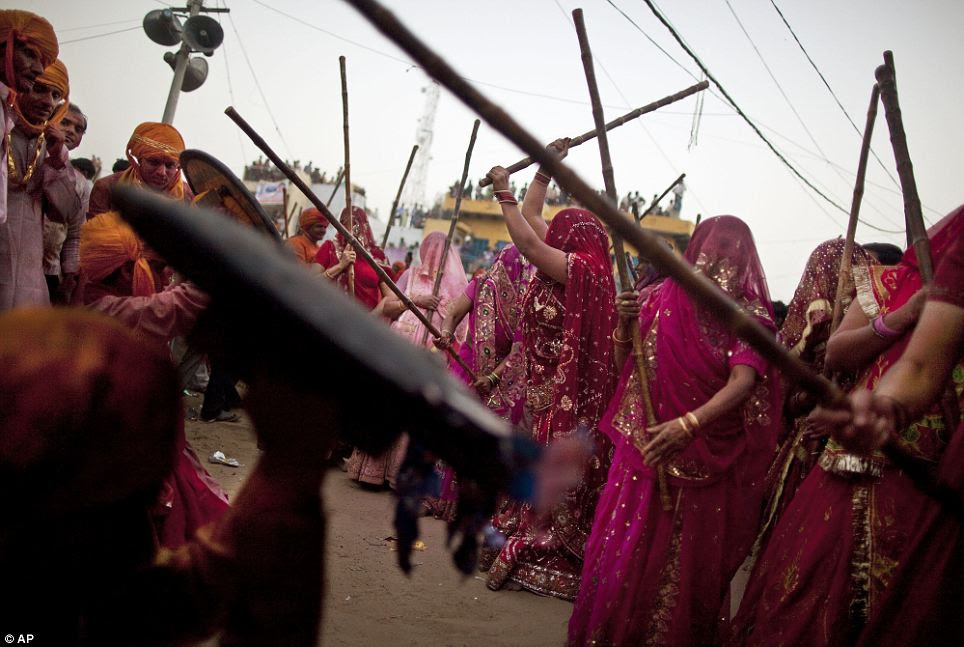 Holy: The ritual fighting remembers the legend of Lord Krishna, who was chased away from the village by his lover Radha and her friends after teasing them 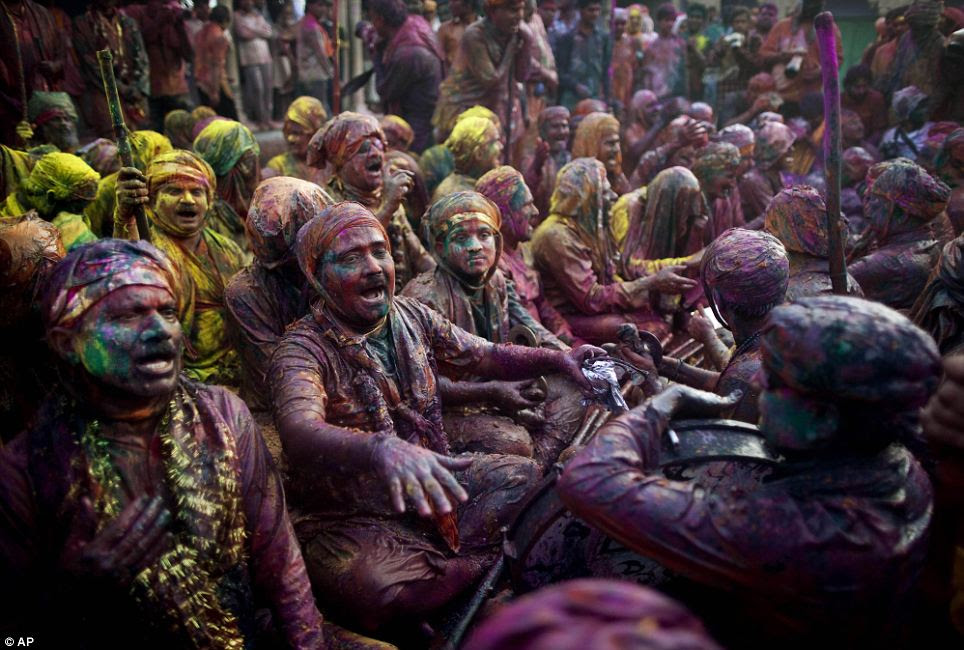 Devotional: Hindu worshippers covered in various colored powders sing prayers during Lathmar Holi at Nandagram Temple, in Nandgaon
It is claimed that the Hindu deity Krishna, who was dark in colour, was jealous of the fair-coloured Radha. He pestered his foster mother Yasodha about it so much that, fed up, she told him he could change Radha's skin by sprinkling her with colours.
Krishna and his shepherd friends visited Radha and her cowherd girls on this day and teased her by throwing colours at her. She and the girls responded by chasing them away with the sticks, called lathis.
In the Lathmar Holi festival, the men from Nandgaon first come to the neighbouring village of Barsana to play Holi with the women there. On the second day, men from Barsana travel to Nandgaon to play the game with their women. 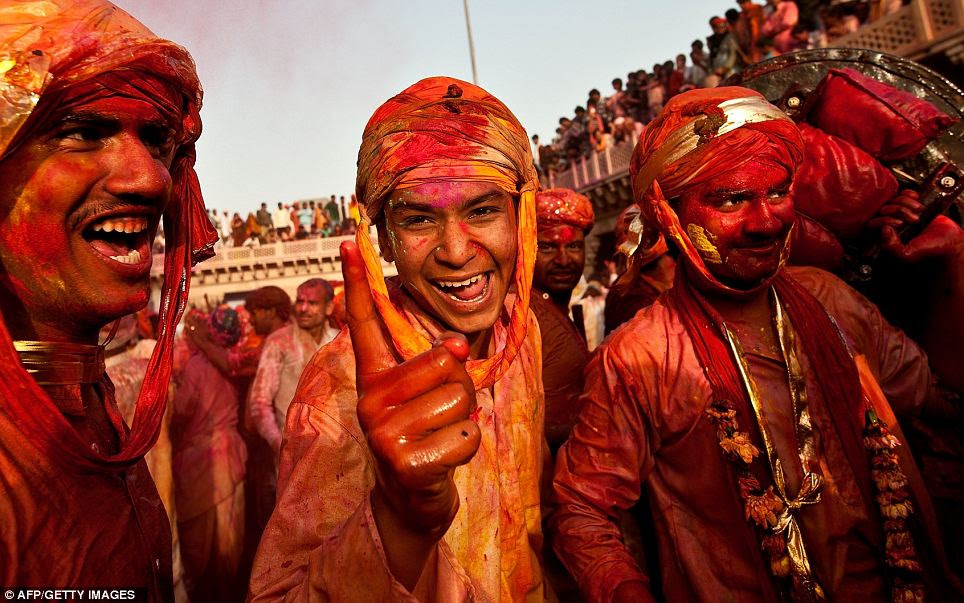 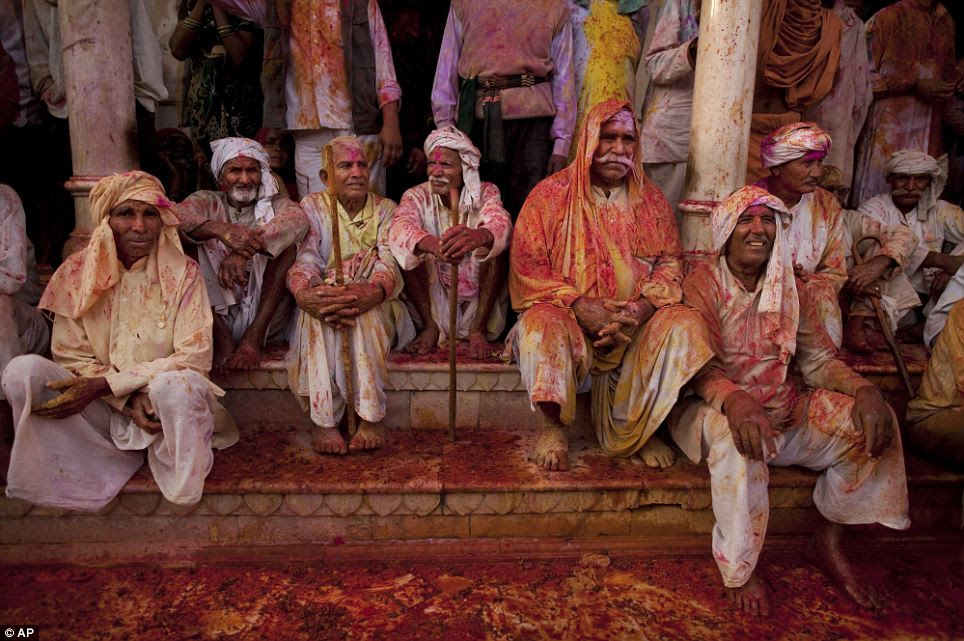 Tiring: Some of the village's older men take a rest from the action
During breaks from the action, those taking part sip an a cold drink called thandai, intoxicating because it is laced with bhang paste, which is made from cannabis, known to Indians as 'ganja'.
After quaffing the bhang, the participants laugh, cry and crave sweets, the ecstatic experience heightened by the theatrical revelry of the festivities.
The women of both villages begin preparing a month in advance, with mother-in-laws feeding their daughters-in-law rich food so that they show off their prowess on the Holi battle zone.
It is a show of love, fun and equality, one, its participants believe, that even the gods descend to witness.
Daily Mail
Posted by ಬಾನಾಡಿ at 7:49 AM No comments: