Even though Yakshagana emerged as a unique art form today, it has multiple existences in Karnataka. Doddata, Sannata, Moodalapaya and Paduvalapaya are its regional variations.  Moodalapaaya is performed in northern parts of Karnataka and Paduvalapaya is popular in coastal Karnataka which includes the districts of Dakshina Kannada, Udupi, Shimoga,  Chikkamagalur, Coorg and in the adjoining areas like Kasaragodu of Kerala State. The coastal Yakshagana again has two main variations called tenku tittu ( i.e. Southern style) and Badagu Tittu ( Northern style). Both styles have a night long stage performances with music, dance, costumes and dialogues. Talamaddale is another form, which has only spoken world.

Dr. Purushothama Bilimale, eminent Folklorist in his paper presented at the IGNCA Conference on Mahabharata during Jaya Festival in New Delhi explains the re-creation process of Mahabharata Katha in Yakshagana.
It is a not an easy task for a scholar to comprehend the Mahabharata re-creation process in Yakshagana due to its diversity and magnanimity. There are about thirty-six professional troupes performing more than 4000 Mahabharata centered Yakashaganas every year and also little more than 1500 amateur troupes annually performing an average of 1000 Mahabharata based episodes.  We could also listen to more than 1500 Talamaddale performances all over the year. Thus there will be around 6500 Mahabharatas are created every year in a remote and tiny place by the people. At an average of 300 audiences per performance, there are about 20, 00,000 people watch and enjoy Mahabharata in and around coastal Karnataka.
The Mahabharata  re-creation process has four important levels:
First, there are Prasangas or episodes, which are texts written by various authors, during the early decades of 17th century. As listed below, there are about 170 independent episodes are currently available on Mahabharata.
Secondly there are musical texts, selected by the Bhagavata during performances, which are intricately produced lyric compositions based on these episodes in various meters set to different talas.
Thirdly there are verbal texts, which elevates the first text into a visual text via second text. A performance of verbal art is something more than words. It includes the artistry of voice and body. Hence crosses the linguistic level. During this phase, the actor is independent to use all of his resources like scriptures, plays, literature, society, politics, and practically everything. His makeup and dance styles visualize the Mahabharata story on a tiny stage. This creates an interesting pattern of Mahabharata, which is very unique to each performance. That is why people watch Mahabharata again and again.
And finally, the audience text, where various types of audience from different castes and classes creates or interpret their own Mahabharata narratives while watching performance on stage.
The relation between all these four levels are again multiple and complicate in nature.
Aesthetics of artistic stage performances:
Perhaps one of the greatest contributions of Mahabharata performance in Yakshagana can be their role in the development of aesthetics of artistic stage performances. Costumes and make-up constitute an important aspect of the visual non-verbal communication in Yakshagana Mahabharata. The audience will recognize distinctions within the costumes and makeup worn by various characters on the stage. This points to another level in which the colors work as a sign – they project different categories within the new world created on the stage.
One of the fundamental features of these costumes and make up are its symbolic nature of representation. The very nature of the theme that Yakshagana deals with – the epic world populated by gods, demons and super human characters-would preclude any possibility of realistic presentation. The various colors project different categories to which these characters belong. Dharmaraya, Karna and Arjuna will have same red colors with kingly headgears, where as Bhima and Dushyasana have gorgeous red-based colors, for their quick-tempered angry personality.  Young Abhinanyu has sharp red colors with fire symbol on his forehead, Duryodhana, will have heroic colors with demonic blue lines.
Current trends:
One of the most obvious developments of Yakshagana Mahabharata in the last two decades has been a movement away from ritual towards entertainment. This process of de-ritualization with the decreasing religious appeal, the change in the context, theme and message change has been secularized Mahabharata. This change gets expressed in the way characters like, Karna and Dhuryodhan. These characters are no more wicked and evil but recognized as pratinayakas (anti hero). The learned artists through a process of reinterpretation radically altered the traditional meaning and emphasis is being laid on humanizing wicked characters. Thus Karna some time portrayed as the champion of downtrodden, Hidimba  speaks about the liberation of woman, and Dhuryodhana as a protector of ancestry.   The artists highlights their worthy qualities and even provides justification for their wicked deeds. As a result, instead of highlighting the religious message, which is the main theme of the written text, the emphasis in the performance text, falls on the tragic predicament of the protagonists.
Posted by ಬಾನಾಡಿ at 6:03 AM 1 comment: 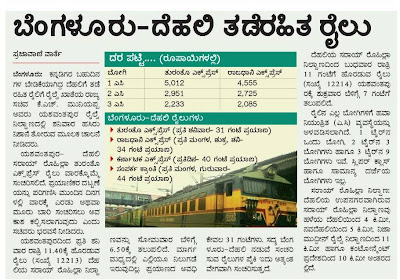 Posted by ಬಾನಾಡಿ at 6:50 PM No comments: 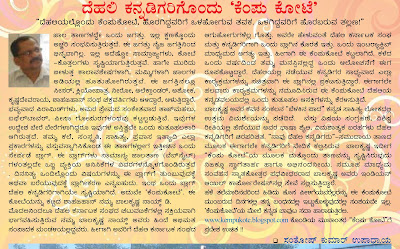 Posted by ಬಾನಾಡಿ at 6:00 AM No comments: 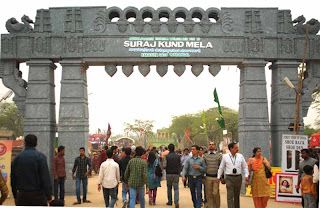 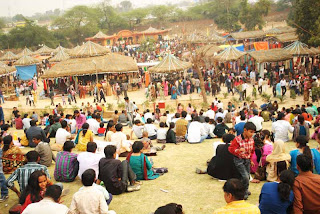 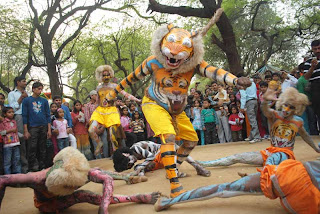 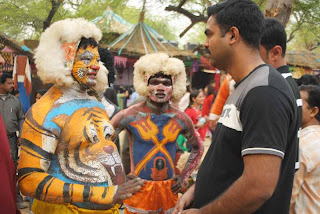 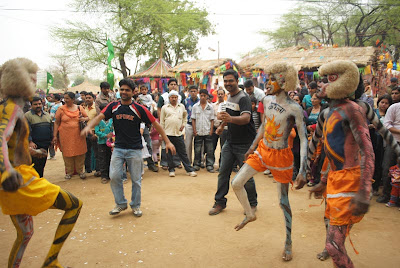 I have witnessed a fabulous dance performance by physically disabled youngsters. 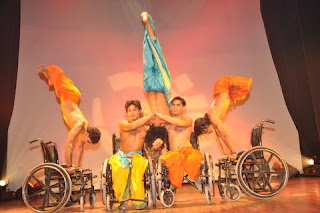 I couldn't believe my eyes about what I saw. There was a programme by Ability Unlimited Foundation,Delhi at Delhi Karnataka Sangha Auditorium on this weekend.
The programme started off with a Sufi Dance performance on wheelchairs.
I couldn't believe that something like Sufi dance can be done on wheel chairs.
The second performance was Purulia style Natya which was also performed on wheelchairs.
Third performance was Thillana which was also on wheels but some girls who were dancing along them were deaf and dumb,but still no one could make that out as they haven't missed a single beat of music which was unbelievable.
The fourth one was Talent Show which included dance on wheels as well as Bharatnatyam and it was about Devi Mahishasura Mardini.
The fifth one was Thantra which is the form of Marshal Arts of Manipur.
The childrens performing this act had real swords from which they fought.
The swords even sparked during the fights,which was unbelievably perdormed on wheelchairs. 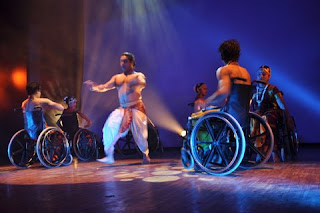 It was just mesmerising and breath taking performance.
The sixth one was Yoga performed on wheels and they also showed Aasanas which sometimes a normal human can't do.
But they performed with such an ease that I just can't explain.
The seventh one was a dancing act on Geeta Updesha where a wheel chair was decorated as Ratha which was just unimaginable and Lord Krishna gave Arjuna updesha on right deeds and wrong deeds and its result.
Till I saw this,  it was unimaginable for me that a wheelchair is representing a Ratha.
The last performance was on the famous track by A. R. Rehman, Maa Tujhe Salam........and you won't beleive at the end the whole audience gave the participants a standing ovation which was first time.
For me, it was one of the best programmes ever I have seen. 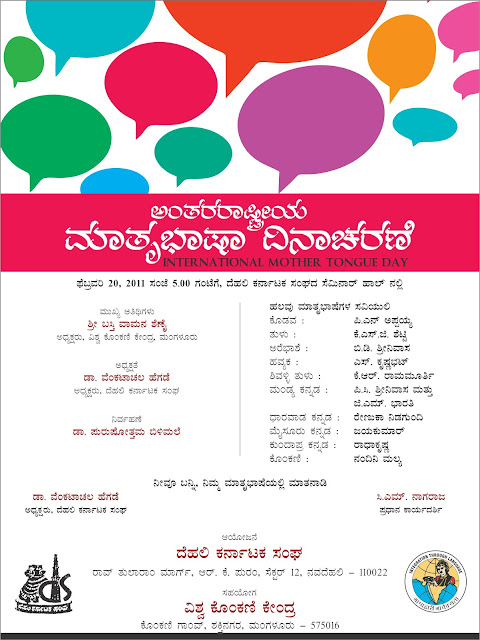 Posted by ಬಾನಾಡಿ at 6:48 AM No comments: 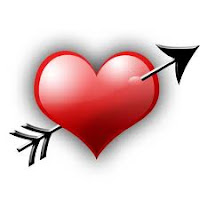 The most awaited season of love is here of youngsters THE VALENTINES DAY.

This is actually a western festival which in today's century is celebrated by not only youngsters but also the people of all ages.
Our film industry has also shown this in their cinemas like Dil To Pagal Hai, etc.
But have we ever thought that why we celebrate this day?
Or is it all about young generation celebration?
No this day is not barred for any generation,age,sex or culture.
Valentines day is just about love and spreading of love all over.

But we just have to understand about its definition.
Love is not about sharing happiness and sorrows but its also about sacrifices done for each other.
But its just that the young generation should understand and feel the essence and sweetness of this world's best feeling called as love.
HAPPY VALENTINES DAY to all of you.

Mohair Shetty Kodavoor
Posted by ಬಾನಾಡಿ at 11:59 PM No comments: 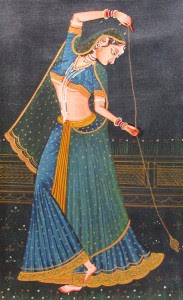 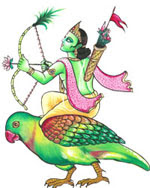 Email ThisBlogThis!Share to TwitterShare to FacebookShare to Pinterest
Labels: Poem

A Symposium
on the
Living Traditions of Mahabharata
Indira Gandhi National Centre for the Arts, New Delhi
10-16th February 2011 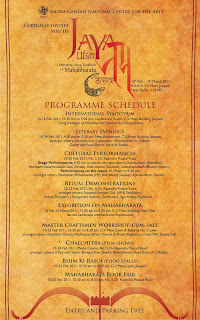